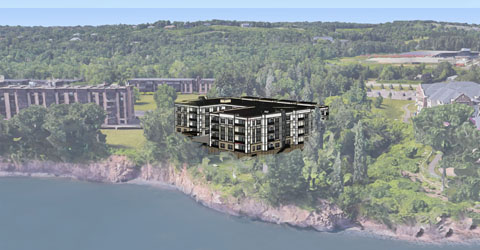 Senior co-op residents to be picked by lottery

A proposed waterfront senior housing cooperative to be named Zvago Superior Shore may fill before the developer moves so much as a shovel of dirt.

With more would-be residents than space available in the 51-unit building, Tim Nichols, a partner in OneTwoOne Development, decided a lottery would be the fairest way to determine who will move in to the new building to be constructed at 3900 London Road in Duluth.

OneTwoOne, based in Shoreview, Minn., received more than 100 inquiries about the availability of units in the building before ever marketing it, said Nichols, who met with many of those people during a Wednesday afternoon gathering at the Kitchi Gammi Club.

He aims to collect the names of interested parties through Wednesday and then enter those names in a random drawing.

Zvago has a different target market than many other conventional senior cooperatives, namely people in their 60s, a group Nichols refers to as “younger empty nesters.”

“It’s a niche that previously didn’t have a lot of good options for owner-occupied housing,” he said, noting that many of these folks want to downsize their homes but feel a deep attachment to the neighborhood.

The proposed 4-story building overlooking Lake Superior will be the fourth senior cooperative to operate under the Zvago name, with sister properties in Minnetonka and St. Paul’s St. Anthony Park neighborhood, and another under construction in Apple Valley.

The Duluth building is expected to cost $15 million to $20 million and will be located next door to the Ecumen senior campus.

Ecumen will be more than a neighbor. The same nonprofit is also an investor, as it joined forces with Lifestyle Communities to launch Zvago.