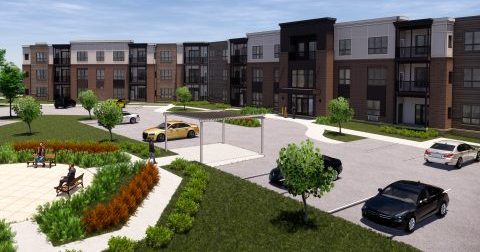 Zvago held a groundbreaking ceremony for a 48-unit senior citizen housing cooperative in Stillwater on Tuesday, Dec. 1, afternoon in a virtual celebration.

Zvago held a groundbreaking ceremony for a 48-unit senior citizen housing cooperative in Stillwater on Tuesday, Dec. 1, afternoon in a virtual celebration.

The speakers recorded their comments, as the audience could ask questions about the project during the Facebook Live event. Zvago Stillwater members, the Zvago Cooperative Living team and Ecumen joined the festivities. The event was held via a streaming service instead of a traditional ground-breaking celebration because of COVID-19 precautions.

Tim Nichols, president of development, thanked key stakeholders who were instrumental in the process. He thanked Stillwater mayor Ted Kozlowski, the Stillwater City Council and the planning commission. Nichols noted it took a lot of work explaining the organization’s project.

“You were there for us the whole way,” Nichols said. “City staff were very important and very, very helpful … We are very grateful we worked hand in glove to make this happen.”

For any Zvago groundbreaking celebration, the organization holds a soil-melding tradition where members living in a Zvago home bring small jars of soil from current homes to mix with soil from the new construction, symbolizing the coming together of individuals into the new community, according to a press release from Zvago. For the virtual celebration, members either sent in or dropped off their jar, as the Zvago team conducted the ceremony on its members’ behalf.

Ben Landhauser, vice president of development, led the soil-melding ceremony at the Stillwater site, 114 Brick Street S. He spoke while standing in front of a large mound of excavated dirt.

He noted there will be plenty of hauling taking place in the next couple weeks as approximately 2,600 truckloads of dirt will be hauled from the site. Foundation work is slated to begin by mid-December.

“There are a lot of exciting things are happening,” Landhauser said. “We are so excited to celebrate with you today.”

Nichols assured the new soil will be incorporated under the building foundation — even as truckloads of dirt is being hauled away.

The Zvago Stillwater site is expected to open in approximately one year, and the home will be open to residents 62 years or older, and will include 11 acres of green space.

Nichols noted that building the new site wouldn’t be possible without a lot of residents coming into the cooperative community.

“The melding of soils has evolved into an emotional, very meaningful experience …,” Nichols said “The day we brought soil together from other parts of our lives and brought it together to this site today to really blend or connect those past experiences with what will become your present and future experiences.”